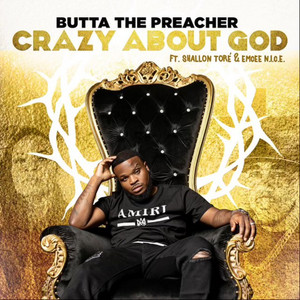 Just within 2 days of Butta The Preacher’s new release, he ranked at the top of the global music charts with his new hit single “Crazy About GOD” Ft. Shallon Tore’ and multi award winning recording artist Emcee N.I.C.E. Butta The Preacher is a native from Gary, Indiana who’s music career as a Christian hip hop artist is something the music industry’s been needing.

At 21 years old, Butta The Preacher was shot 9 times and left for dead. Soon after, he was hit by a drunk driver, which had left him flatlined, then he was brought back to life. During that moment, Butta The Preacher, who was once Butta Gutta, announced his calling to the gospel. He now calls his rhymes sermons on beats and he is bringing the church to the streets! Crazy About GOD is on all major radio stations around the world and can be bought and streamed on all digital music outlets. Butta The Preacher says this song is the Holy Anthem #CAG