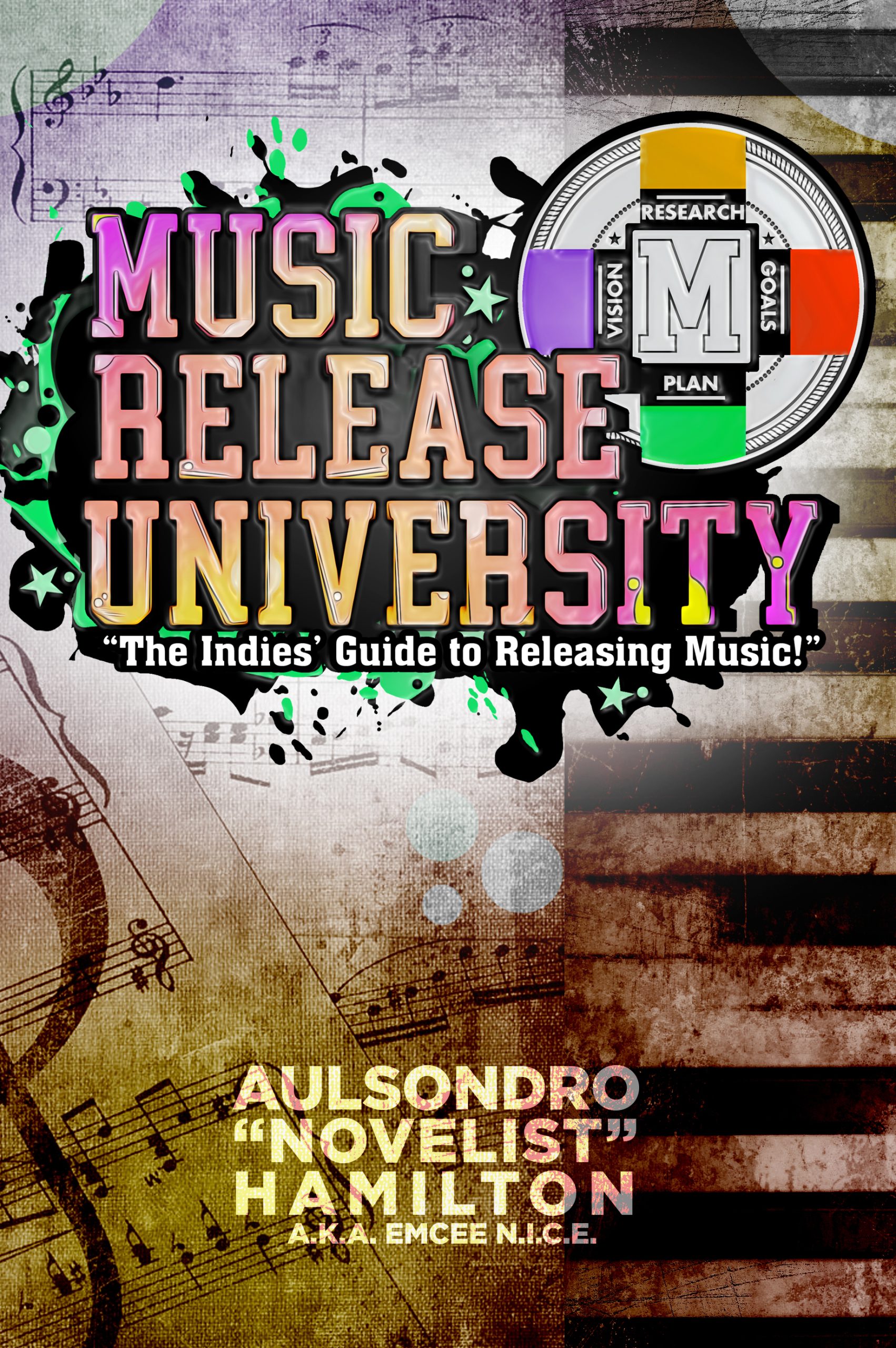 Aulsondro “Novelist” Hamilton, p/k/a Christian Hip Hop Recording Artists Emcee N.I.C.E., a 30-year music veteran, is proving why the blessings keep on coming his way as he keeps on winning in the music business with his new book “Music Release University: The Indies’ Guide to Releasing Music!”.

Teaming up with the Information, Technology & Literacy Foundation books & AULGRAY 31 Media, Emcee N.I.C.E. Gives the independent artist real-life insight on how to prepare their music for release to the masses. An artist is given thought-provoking techniques that challenge them to be honest with themselves with their level of understanding and help them understand the levels of preparedness needed to succeed as a professional recording artist not in the music business but in life. In what most would consider one of the most unique ascensions in music history, Aulsondro Novelist Hamilton has been quietly amassing a resume that very few have accomplished in the music business today. “It’s crazy to think that I had the same music manager as Montell Jordan, Coolio, Lighter Shade of Brown at the same time in Paul Stewart’ N.I.C.E. Say’s.

“I mean, Paul at that time was the “can’t miss manager” who discovered those I’ve mentioned, and then you add The Pharcyde, Warren G, House of Pain, Domino to the mix, I mean, the list goes on. Combine that with arguably one of the greatest marketing gurus in the history of music in Kevin Black, who helped establish the careers of 2 Pac, Dr. Dre, Snoop, Eminem, The Game, No Doubt, and so many more; I just paid attention, watched the energy, effort, their movement and how they were both absolutely strategic with every decision. Along with my pop Dejon J.H. Clark, who motivated me to think beyond, to think, legacy, and establish generational wealth that goes beyond the music business. Also, my mentor Tom McGee knows how music politics work and that you can win if you understand it and apply it. So I applied all of the wisdom, created a series of “how-to’s,” and called it Music Release University, with the first one being “The Indies Guide to Releasing Music!” N.I.C.E. Says.

In this book, Emcee N.I.C.E. Shows artists how to start with a vision, do research, set attainable goals, create a PLAN, and win!

Artists will be given the following insights, tools, and more… Understand the mindset of a successful professional recording artist, research, and development for your release. Learn how to S.W.O.T. setting attainable goals to achieve for your release, create a plan, and execute that plan for your release

Following the release of the book, Emcee N.I.C.E. will also debut his online course for Music Release University for a more in-depth learning experience for an artist with the ability to do a one-on-one with him.

Here’s what his mentors had to say about him:

“When I was early in my career, and earlier in his career, I was blessed to meet and work with a young Novelist. Years later, I am inspired by his hustle, drive, and success.” – Paul Stewart, Music Supervisor / Music Producer (2 Fast 2 Furious, Hustle & Flow, Insecure)

“I have never met a guy like Emcee N.I.C.E. Who can do it all; this guy can produce, write, rap, market, promote; he is a one-stop shop when I needed anything musically before speaking to Jimmy Iovine, I would call him to get his opinion, I LOVE IT ”? – Kevin Black, Former VP Warner Bros. Records Former VP of Rap Promotions Interscope Records (2 Pac, Dr. Dre, Snoop, Eminem, 50 Cent, No Doubt)

“Aulsondro (Novelist) Hamilton: A true industry protege who is accomplishing his goals and aspirations far beyond the pale. He’s an entrepreneur, a teacher, a leader, and is inspiring in all aspects of entertainment. Live up and stay up.” – Tom McGee, CEO, TMG/Street Pride

“Novelist is a guy that has always been ahead of his time and definitely has a wealth of knowledge. When it comes to the music business, he is accomplished and a master writer, producer, recording artist, and advocate for creator rights and education. – Chantal Grayson, CEO, Industry Executive

Aulsondro “Novelist” Hamilton, also known as the Christian Hip Hop recording artist Emcee N.I.C.E. And a 30+ year music industry veteran. An authority in the music business, who first landed on the Billboard Charts in 1994 with a Latin rap group, A Lighter Shade of Brown, and subsequently would go on to achieve multiple No. 1 records on the Billboard Charts as an independent artist, Multiple Platinum Records with 2 Pac & Nas, 8 motion pictures soundtracks including Academy Award film for “Best Picture” CRASH with urban rock group KansasCali, and as a soloist 5+ No. 1 record on the Billboard charts in the fields of Gospel/Christian. He is also one of the creators of “Da Jammies,” the first African American animated music series to debut on Netflix, currently on the Kartoon Channel. Emcee N.I.C.E. Also became the first hip hop recording artist in history to have a spice deal with Valido Foods that landed “N.I.C.E. Blend” his own seasoning. He was born in Los Angeles, California, but raised in El Paso, Texas, by his Puerto Rican and African American mother. He is an advocate against bullying, hazing, and any other acts that cause someone to feel life isn’t worth living. Aulsondro was always driven by the urge to be successful and knew that to make a difference, he would have to be the difference and make his goals realistic, then take each goal, one at a time. For the many musical journeys he has been on and the accomplishments that came along with it, nothing gives him more satisfaction than having the ability to share his expression of L.O.V.E., Passion, Knowledge & Wisdom, and it being reciprocated.

“In the music business, there will be many storms that a professional recording artist goes through to achieve greatness; through the trials, you just have to remember to stay steadfast knowing that there is light on the other side of it.” – Emcee N.I.C.E.

Paul Stewart, Complex Magazine’s Top 25 Best A&R’s in the history of music, is a music industry producer, music supervisor, and brand marketer recognized for discovering and developing a number of notable musical artists, including Montell Jordan, Coolio, Warren G, The Pharcyde, House of Pain, and Lighter Shade of Brown. Stewart has music supervision credits in over thirty-five films, including Academy Award-winning Hustle & Flow (Oscar for Best Original Song), Four Brothers, 2 Fast 2 Furious, and Poetic Justice. Pioneered online music distributor ARTISTdirect, Stewart was a key player in the rise of hip-hop culture and became a valued consultant and entertainment marketer for brands as varied as Puma, T-Mobile, and Dr. Pepper. Through PMP, Stewart discovered and developed multi-platinum musical artists Coolio (“Fantastic Voyage”), The Pharcyde (“Passin’ Me By”), Montell Jordan (“This Is How We Do It”), and House of Pain (“Jump Around”), Lighter Shade of Brown (“Hey DJ”).

Tom McGee, CEO, and founder of TMG/Street Pride, later known as TMG Consortiums, have been instrumental in many records landing on the Billboard Charts in the Top 100. Top 200. Digital Songs, Christian & Gospel. Tommy “Tom” McGee is the founder and lead singer of the legendary group the TMG’s and became one of the world’s best-kept secrets in breaking over 200 records in the music industry, highlighted by the development of Raven-Symone culminating in “That’s So Raven.”

Chantal “Chanie G” Grayson is an entrepreneur, real estate broker, and author. Grayson is a co-owner of the award-winning GH3 Radio – God’s House of Hip Hop station. As a real estate broker, Grayson has brokered several multi-million dollar transactions and has additionally provided consulting for several non-profit organizations throughout the greater Los Angeles area, assisting with business formation, branding, and marketing. She has authored books, “Love at First Sight Positive Affirmations for Young Girls of Color,” “Paths to Success Leverage: College Admissions, Financial Aid and the Art of Applying,” and “Don’t Hate My Football IQ: The Gridiron Simply Explained.” She has a Master’s degree in Education with an emphasis on technology from California State University Dominguez Hills, a Bachelor of Arts degree in Linguistics from the University of California Santa Barbara, and her GRI designation in Real Estate.